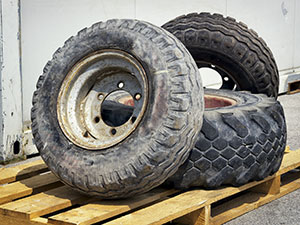 When we think of tyres, we picture them on our cars, but what happens at the end of a tyre’s life? The management of waste tyres is a serious responsibility.

In Australia, tyres are required by law to be transported to a waste facility that can accept them. If not taken to a lawful place, tyre retailers, retreaders, and transporters can face harsh penalties and fines. The reason for this strict practice is that tens of millions of tyres are presented as waste in Australia each year, and there are associated environmental and health risks with the unsafe disposal of rubber. These include toxic chemical leaching, the risk of tyre fires (which emit harmful toxins into the atmosphere), and illegally dumped tyres can become breeding grounds for pests, rodents and mosquitoes.

So what are the options when it comes to tyre waste management? Broadly speaking, tyres can be used for three things once they are no longer roadworthy: as landfill, recycled, or burned for fuel. 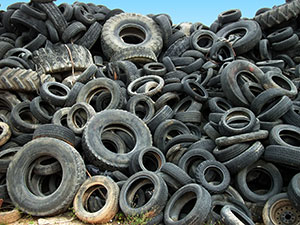 Landfill is the least desired option, as tyres take up valuable space and the chemicals can leach into the environment. While the long-term effects have not yet been observed, there are theories that tyres can destabilise a landfill. And if not correctly handled, they can float to the top of a landfill over time, negating the intention of keeping them contained. The landfill option also presents a risk of tyre fires if not properly dealt with, which results in toxic chemicals being released into the atmosphere. The environmental recycling of tyres is considered to be the ideal solution, but it’s not always an energy efficient and scalable solution. A lot of work is being done to find ways to create scale and efficiency for bulk recycling of tyres.

Tyres can also be re-treaded and re-used as roadworthy tyres, which means they are effectively remanufactured using the original casing but replacing the tread component. Retreaded tyres are typically more often used on commercial vehicles rather than passenger vehicles, as there is less control over their standards and they are not usually fit for higher speeds.

When tyres are burned for energy, they are first shredded or turned into chips, which are then combined with other fuels and burned in specific facilities to generate fuel. Tyres are known to have a high level of heat energy, and can produce the same amount of energy as oil and even more energy than coal. They are therefore considered a good fuel source.

However, this burning process needs to occur in a specific and controlled manner, as burning tyres can potentially release toxins into the atmosphere. This can have subsequent environmental and health impacts.

Burning tyres for energy is considered to be a much better use of waste tyres than using them as landfill, as it is considered to have a positive or neutral net effect. However the ultimate goal is to find a sustainable way of recycling tyres.

The management of waste tyres is an ongoing environmental issue, and advancements in research and technology will hopefully yield an ideal outcome. In the meantime, it’s important to be aware of how we manage our waste tyres, and to ensure that any tyre providers you use are committed to the safe and environmentally-friendly disposal of your used tyres.